Sde Ilan is as quiet a place as you’ll ever find. There are far more livestock than there are residents. The most “happening” day on the moshav calendar is the Shavuot/Bikkurim festival where all the newest babies born in the past year are paraded around in a tractor. The old men will sometimes sit with their Circassian friends over the best coffee in the world and a promising afternoon of shesh-besh. And the narrow country road that winds its way here — the one where even the most hardboiled sabra who doesn’t know West Virginia from Manhattan rolls along, windows down, with John Denver belting out Country Roads—  is the most boring, quiet, country road of all.

A car from neighboring HaZor’im (where you have to be REALLY devoted to land and kin, because to live there is to live in the hellish heat of the Yavne’el Valley) rushes into Sde Ilan a few hours ago, front windshield smashed. His car had been pelted with stones around 50 meters shy of the turnoff to Sde Ilan. The security committee had decided this morning to close our gates for now, until the “matzav” dies down, but of course he was let in and told his story.

It’s a story I just heard last Shabbat from my neighbor Yehuda, who was one year old when his parents pitched a tent on these fields along with a dozen other determined young couples. We were sitting over herring and chummus, and he was telling us of his parents’ journeys back and forth to Tiveria from their training farm (just about a mile from those tents they’d eventually pitch). It was April 1948, and his mother were forced into detours off this road to make it down to the Scottish maternity hospital in time for his birth. (His father would learn that Yehuda entered the world via morse code, signaling that he best hurry down to meet his son. From somewhere, a miracle — he procured a package of petit-beurre biscuits and a bottle of juice, and though the mohel had fled because of the Arab uprising, he found another one a few days later, and they were able to celebrate their sabra in true pre-State style. But I digress.)

These roads stopped being dangerous by summer 1948. That’s when Shibli surrendered and Lubia (right by Kibbutz Lavi) was conquered. But last night, this happened on the road, with a new generation of Shibli youths waving their Hamas green flags: 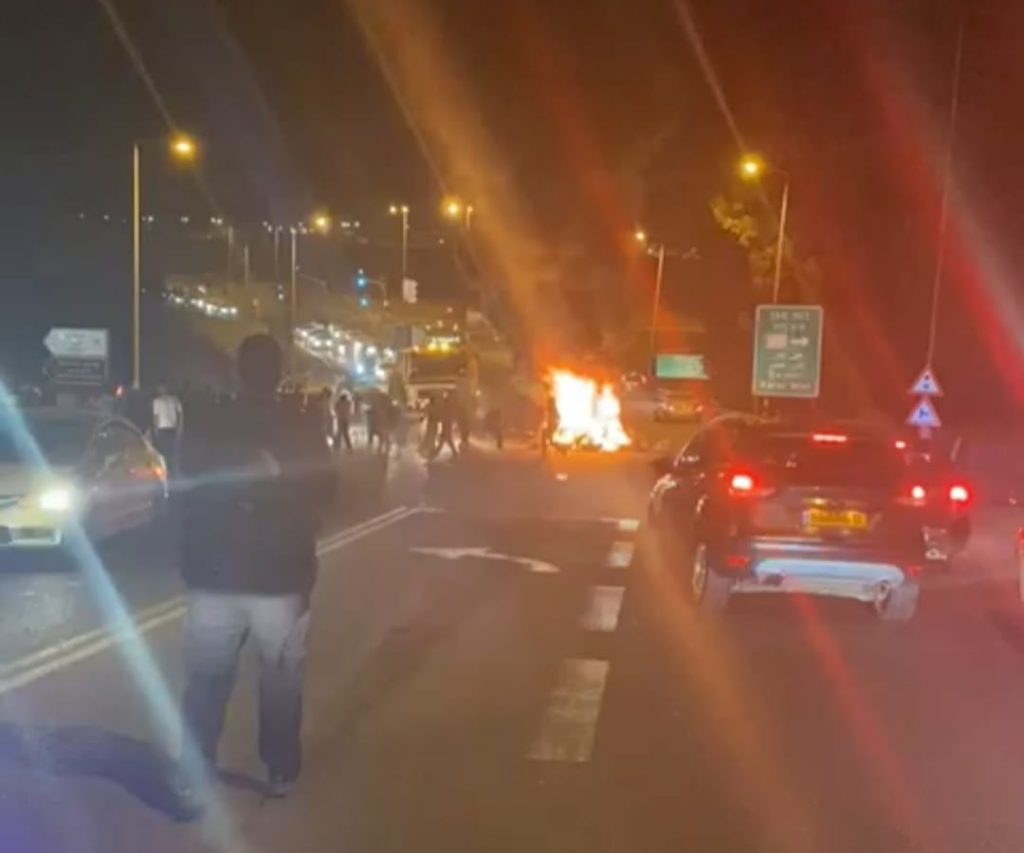 And then this happened, in nearby Kfar Kana, where the ancient nasi Rabbi Shimon ben Gamliel is buried, where we go to press our olives alongside our Arab neighbors in the super-clean and modern olive press:

(do not watch if you find violence upsetting):

The poor man was saved from a lynching by some residents:

And then Eliezer from HaZor’im gets his windshield smashed meters from the sweetest guy in the world, Zed from Kfar Kana with the jerry curls who works the gas station and fell in love with my mother-in-law during her brief visit and always asks after her.  And then I get another official message from Home Front Command informing all residents of the lower Galil that demonstrations will be happening soon here (Shibli, 5 km south), here (Tur’an, 5 km northwest) and here (Kfar Kana, 7 km west), and a half dozen other places, and who knows how bad it will get, so please stay home off your country roads and be extra vigilant.

I’m broken by this in a way that 73 yr old Yehuda who is as old as the State isn’t, because he’s seen this before, and if I ask him he’ll say he’s seen it many times — but I haven’t. We’ve lived here just shy of three years, and my Arab Israeli neighbors had earned my trust. I felt safe driving through their villages, which I do (did?) all the time, and I had NO apprehension having them in my home, going into their homes, shooting the breeze, learning from them, wishing them ahlan along the way. They are Israelis. I am Israeli. I thought that meant something.

But last night and tonight there are hundreds and hundreds with green Hamas flags out on the hunt, screaming that their Israeliness is made of different and awful stuff, and though I feel safe, I also see very clearly a dangerous fifth column setting fire to my quiet country road.

One Reply to “Betrayal”