“I birthed a goat,” he said casually. 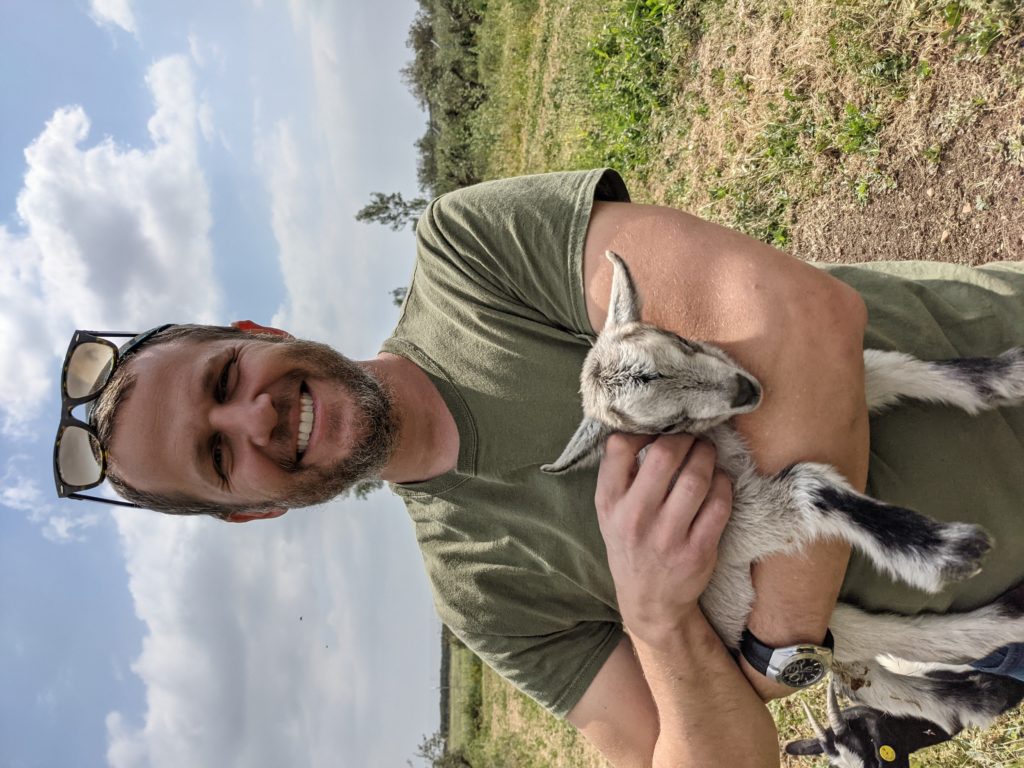 I was in the States visiting my parents, on the phone with Ira over my morning coffee. I could tell from the uptick in his voice (which rises one whole octave higher when he’s excited) that this was a studied “casually.” We had three goats in various stages of pregnancy, and not knowing anything about gestating goats, we were just waiting around to see what would happen.

“Yay that’s awesome! Did you know what to do?” (I have watched him watch dozens of YouTube videos on goat births, so I knew he came in prepared, but still…there’s nothing like your first time.)

“Well, the fetlocks were just sticking out of her, so I reached in and pulled the kid out. Cleaned out its airways, presented it to the mother to lick, and that’s about it.”

So while we didn’t get Lulu’s entrance into the world on video, Ira did manage to get some great footage of the newborn.

The mother cleans her baby entirely, and then the baby intuitively searches for the udder:

During Temple times, and if this baby had been male, then he’d be gifted to a cohen [priest] (who would bring the kid as a sacrifice and enjoy a nice dinner — that is, if the goat didn’t have any blemishes rending it unfit for a korban). Luckily for us, Lulu is a girl, so there are no halachic issues with welcoming her into the family flock. Lulu’s aunts, though, are pregnant, so Ira hurried to the rabbanut, where Blimi Shtissel (the secretary whose name I just had to drop, because maybe she’s Gitty’s sister) helped him complete a rather complicated transaction involving shared ownership with a gentile. It’s a loophole that allow for halachically-observant Jewish farmers to hold on to male firstborns. Actually, all farmers raising kosher animals have to make sure to get this done annually, as it’s a necessary mechanism that ensure the kashrut of dairy and meat for the consumer.

A few hours after birth and feeding, and the goat is a fluffy smily prancing delicious addition to the world:

Why keep goats? Well, hopefully soon we’ll learn how to make cheese from their milk, and maybe other products as well. Ira tried goat meat a while back, but the kids and I couldn’t bring ourselves to taste it, so we won’t be eating these animals. For now, we’re raising them because they do such a great job eating all of the weeds in the grove and fertilizing the ground. A huge plus: they are ridiculously cute and friendly, a lovely bonus that has added a fresh energy to our farm this spring. Here’s hoping our flock increases!

4 Replies to “Had Gadya (in time for Pesach Sheni)”