Composting, recycling, cutting down on disposables — to quote my gif spirit animal:

And yet, here we are, composting like a BOSS. What happened to my could-care-less approach that had worked for us for nearly twenty years of homemaking?

This push towards caring about the bigger picture is definitely fueled by our concern for our own little piece of E”Y. I had never given serious thought to the damage that my family was doing to the environment until moving to the moshav (I felt that issue was so far down my priority list as to barely merit any consideration.) Frankly, I’ve only just begun shifting a little in giving this matter passing attention because I’m starting to notice the soil on its own terms. I’m walking it daily, noticing its cracks and colors, feeling more akin to it all. I’m realizing that if I want to move towards a deeper, more profound relationship with the land, I can’t just focus on the land’s history — I have to take my eyes off the books and start paying closer attention to the very ground under my feet, the parcel that we’ve chosen to nurture and care for.  I’ve committed to examine and understand what’s going on (this basically means absorbing what Ira’s been learning over the past year or so), so that I can help do my small part in rejuvenating our fields.

As for Ira, his all-in approach to our new life has him committed to learning about and implementing some new behaviors regarding how we dispose of our trash. Basically, I’m along for the ride, so long as I don’t have to do much.

I feel pretty confident in saying that we had an abysmal track record when it came to doing anything about the environment. Sure, we always wanted to do right by God’s green-how-much-longer earth, but honestly, it was just too much work. Mea Culpa on just about every violation you can think of. We were the reigning family in the Kingdom of Use n’ Toss. The lady at the chad peami store saved her widest smile for us, the Duke and Duchess of Disposables. We were all like: let them eat cake, so long as we can throw away the pan afterwards, along with the plastic plates and cutlery.

Then we bought a farm.

While I don’t think we’re on Green Peace’s short list for their most-radically-changed lifestyle award, I will say that the move to the country has changed how we consume products and dispose of packaging. I’m pretty sure being surrounded by gorgeous stretches of fields contributes to our current gung-ho sense that we, too, can recycle rather than toss. That and the fact that Ira has built his first experimental aquaponics system, which will eventually require some rich soil for his wicking beds, has caused us all to rethink our kitchen routines. How can our cooking and eating habits be altered to present an alternative to chemical fertilizers? Can our own consumption help supply the conditions necessary for plant growth in his contained system and, thinking larger, eventually help naturally rejuvenate our fifty dunam of farmland (which has been sprayed with chemical fertilizer for decades now)?

Going green is a slow process, but one tangible and fairly easy shift we made was the compost bin. Composting is super simple, and there are abundant resources online to learn more. Basically, you’re building a nutrient-rich material and getting rid of all of your organic garbage at the same time. Composting requires a combo of brown (carbon) and green (nitrogen) matter. “Brown” includes things like dried leaves, ground up wood, paper, cardboard — the smaller pieces of all of these materials, the better. “Green” are things like food scraps (everything, basically, except for meat/poultry/dairy), vegetable/food peelings, manure, grass clippings.

Firstly, Ira bought four metal posts and wrapped them with chicken wire. There’s no bottom to this “bin.” Secondly, he and the kids went around the moshav and collected hay, leaves, and grass — grass itself contains the right balance of “green” to “brown,” so that’s a great ingredient to add to the brew. He bought a wood chipper to process the larger tree and plant trimmings that they had collected. Additionally, he was gifted with two bags of sheep manure from our landlord.

Once he built the bin (10 min), and the kids collected the debris/organic matter (20 min), we spent a few minutes more layering in the stuff. You layer brown green brown green, sprinkle the gantze zakh with some water, and voila! The magic happens. 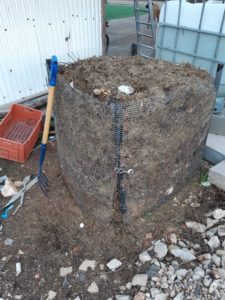 Bacteria is decomposing the material and turning the whole brew into a rich soil-like material. You turn it over every week or two to keep it aerated. What’s amazing right off the bat (after a few days) is if you dig around just a bit, you’ll feel the pretty intense heat of the cook. The interior of the compost bin can reach between 135-150F.

As the mix breaks down, it shrinks quite substantially. Every Sunday, Ira adds two huge garbage bags of grass clippings, plus all the rotten produce benevolently donated to the cause by St. Coby of the Freezerburned Tzarchania. This stuff shrinks like sauteed spinach. We’ve only been at it for about a month and a half, and already have some real compost to transfer to Ira’s aquaponics grow beds (more on that experimental venture in a future post!)

It’s always helpful to give your compost bin some extra oomph to get it steamy. Ira was tipped off by a moshav friend that there’s a worm guru in Kiryat Tivon, and he went off one day to get himself some worms. (The sentences that come out of my mouth sometimes give me pause.) The dude gives away his worms to people like us for the sheer joy of spreading the compost gospel. The worms (like the bacteria) consume the scraps, and their worm casings are like “fertilizer on crack.”

Where does our kitchen routine fit into all of this? We have a small tin on the counter — in go all fruit/vegetable peelings, all produce that is past prime and can’t be salvaged in a soup, half-eaten sandwiches, stale carbs of all sorts, eggshells, torn up paper and cardboard wrapping. Even toilet paper tubes and newspapers can be composted. This gets emptied into the compost bin every other day or so. What ends up now in our (much-reduced) garbage can are past-due dairy and meat, plastic, and glossy food packaging. Our garbage can fills much more slowly than it used to.

(Secret confession: getting rid of stuff in general gives me serious satisfaction, but getting rid of stuff by making it useful? That scratches a DEEP tetris itch. Like the mini triumph of putting together that pre-Pesach meal with a quarter pkg of phyllo dough and a can of black beans — that’s what composting is like, and I guess that’s why I don’t see that little bin as a nuisance.)

For the first time, we realized just how much kitchen waste is being wasted. Most of what is stocking our fridges and pantries is organic and really shouldn’t be thrown in the trash can, where it will just end up in a landfill. (What’s so wrong with that? The organic matter in a landfill is deprived of oxygen, and the anaerobic decomp produces high levels of methane. Composting exposes organic waste to oxygen, so carbon dioxide is produced instead of methane. Even a non-scientist like me knows that Co2 is far more beneficial for the environment than methane.)

I grew up in a recycling house. My mother has always been committed to recycling plastic, paper and glass — woe to whichever child would throw away the cottage cheese cup, or the comics section! I’ve always admired her dedication, but I could never really adapt any of her habits into our crazy hectic life. Convenience is critical to managing a large household, as are disposables. I don’t think I’ll ever be as committed to recycling as my mother, though I am willing to take on measures that are nuisance-free and don’t take up too much additional space in our already-tight kitchen. So as far as recycling goes, we have started recycling plastic bottles and glass containers — we have a large cardboard box unobtrusively by the back door for plastic drink bottles and glass containers. We bring large bags to the grocery store (most of the time, when we remember). We’re definitely using fewer disposables, though we may be offsetting that gain with the increase in water used for washing dishes. Don’t think of asking me to ever give up my Kirkland paper towels from Osher Ad or my seudah shelishit paper plates — it’s not gonna happen. But as I watch the garbage turn into gold for the soil, and as I watch more and read up more on just how much damage humanity has done to the environment in just the last fifty years, I’m starting to think maybe we all should be paying more attention, or there might not be much ground to bury our heads in in the near future.

One Reply to “Tachlis #2: Adventures in Composting”