How many Jewish Israelis, much less Jewish immigrant Israelis, have ever spent time in an Arab town or city? We might casually (or nervously) encounter Arabs in our daily lives, or even meet them more intensively in a professional capacity, but what about on their turf: in their schools, cafes and streets?

No one will give me a clear number (and I’ve asked around the experts of this region), but Arabs comprise an extraordinarily large percentage of the population of the Lower Galil. The current number bandied about (minus the largest Jewish, Arab, and mixed population centers) is a whopping 45%. I could go my whole life sidestepping Sachnin and Arabe, two large villages in the Lower Galil, but then how could I honestly claim intimate familiarity with this region? My deeper interest is in the ancient Jewish roots of these places (Sachnin was the home of R’ Chanina ben Tradyon, and R’ Chanina ben Dosa is buried in Arabe, where R’ Yochanan ben Zakai spent 18 years studying), but it’s also important to talk about their current iterations as significant Arab centers.

Sachnin alone is much more “city” than “village,” with a population of 31 thousand people, a scrappy but very popular football team and a trendy coffee shop sandwiched between Renuar and Golbary. Neighboring Arabe has 21k residents, and growing. Both have taken a new turn, as younger Arabs are drawn away from traditional rural life to the bustle of the city. These places are quickly developing into urban sprawl, and have started to rival other popular hubs like Acco and Haifa in providing Arabs a more upscale, modern lifestyle. Check out some of the newer villas in Sachnin:

What’s missing in both places is any real urban planning that we take for granted in Jewish Israeli villages and cities. There are no public spaces, no parks or benches, no trees or shrubbery. This is a cultural phenomenon rather than a matter of insufficient funds, argues Adnan, our guide; Arabs have traditionally been far more concerned with investment in their private homes than the appearance of public spaces. He’s hoping that with more and more Arabs entering Jewish communities and enjoying their green spaces, Sachnin might allocate more resources to build a park or throw up some trees.

There’s a very small Christian minority here (900 strong) who are lovingly tolerated by their Moslem brethren (this was reiterated around ten times in as many minutes by the beaming Father Salah Choury, the leader of the Syrian Orthodox Church, who “invites all people to come visit Sachnin, City of Love and Brotherhood” [his words]). 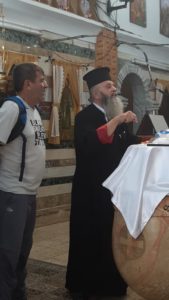 The Father is very, very fond of St. George, who appears to residents in visions astride his galloping horse. There was also recently a dove who entered the new Cathedral (largest Orthodox cathedral in the Middle East, actually — and it was enormous), flew over to a patch of wet cement, and daintily stepped out the image of…a dove! They are covering it with glass and will venerate the miracle alongside the many other icons.

But enough about the Christians, since they make up such a tiny percent of the combined populations of Sachnin and Arabe. What did I gather about the Moslem population? Here are some observations and snapshots:

Now to the highlight of my day, a visit to meet with the charismatic principal (Hamad Sayeed Ahmad) of the Almutanabi School, a mamlachati (government-sponsored) primary school with 400 students. He spoke plainly about the elephant in the room. I appreciated his frankness, and judge it especially important to share his assessment with others, as he is a top educator within the city and is conveying these values to the next generation. He describes himself as “a proud Moslem Arab Palestinian who is also a citizen of Israel”. From what I gathered from Adnan, most residents of Sachnin and Arabe would describe themselves thusly. They are happy as citizens of Israel, but they do not self-identify as Israeli, rather “Arab Palestinians.” This seems an important distinction for them to make as they understand their own identities, and definitely for Jewish Israelis to understand, absorb and not ignore.

While it is illegal to observe Nakba Day in an Israeli school, there is a city-wide observance, and so most students don’t even show up to studies. What is built into the very fabric of Sachnin far more profoundly than the rather-abstract Nakba is observance of al-Ard (Land Day), as well as commemoration of the events of October 2000. When the Israeli government tried to appropriate dunamage in that area in 1976 for army training land (and for development of Jewish villages), they were met with violent opposition that resulted in six local deaths, an event commemorated annually as “Land Day.” (If you’re going to read through any link in this post, let this be the one!)

Fast forward to October 2000, when local tensions between Arabs and Israeli police boiled over into violent demonstrations, exacerbated by footage of the (now-debunked) shooting of Muhammed el-Dura in Gaza, and Ariel Sharon’s ascent of the Temple Mount. Thirteen local Arab demonstrators were killed by police. October 2000 still beats loudly in the memory and rhetoric of the people of Sachnin, and they have a difficult time when a local decides to join the police force (few to no Sachninites serve in the Israeli army, and just a scattering do any sort of sherut leumi service). It’s of note that mosques built in Israel after the conflict in 2000 resemble el-Aqsa and don’t sport the traditional green domes, in solidarity and as homage to the al-Aqsa intifada.

Local Arab possessiveness over their lands (the entire Sachnin valley, in this case, stretching from Sachnin to Deir Hana) is deep and fierce, and growing in intensity and confidence as time passes. They don’t feature של״ח (the multi-disciplinary approach to Land of Israel studies) in their curricula; why should they expose their students to the Jewish connections to the land? While I am strongly opposed to the legitimacy of allowing other “narratives” a place in determining land and resource allocation in modern Israel, pretending like over a million and a half Israeli citizens can’t possibly self-identify as Palestinian or champion the Palestinian cause is the very definition of burying our heads in the sand. (I understand their grievances, and am happy to have heard them, but I obviously believe in Jewish sovereignty over the entire land of Israel, and expect the government to act in the best interests of the Jewish majority. I know that my American-accented hebrew was particularly grating on Principal Ahmad’s ears [though he was very pleasant about it], precisely because to him, I am the very symbol of newcomer-usurper of his land. I am not going to apologize for my Zionism or my determination to promote a strong Zionist ethos throughout all of Israel, even though I’m doing so with an American accent. I think like-minded people should not be afraid to state that position plainly, as the Arabs I met certainly weren’t afraid to state their position plainly.)

Back to the delightful Almutanabi School. Almutanabi is a “Green School,” with a focus on creative ecology and environmental studies.  It is modern and clean, with resources far beyond any my children have experienced in their local schools: twenty students and two teachers per class, a robust computer center, lab and music room, impeccably designed public spaces and a luxury teachers’ room. Can you tell I was jealous? (I wonder if my kids’ crowded school, roughly double the size in population but smaller in physical plant, has been allocated the same budget as Almutanabi). 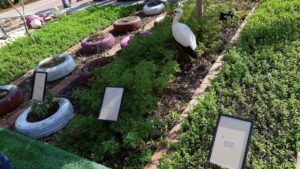 One thing the school didn’t have was an Israeli flag.

The north (excepting the activities of Raeed Salah and his inflammatory Northern Moslem Movement, based in Umm el-Fahm) is often touted as the exemplary model of friendly neighborly relations between Arabs and Jews. Though my day continued on with further meetings, lots of kumbaya-peace tents and more of that fine coffee — the absence of the flag at the school lingered on as a symbol of the very complicated identity that my new neighbors have developed for themselves as “Arab Palestinians” who enjoy the benefits of also being citizens of Israel. In the north, at least, the Arab population see their primary identity as “Palestinian,” the Israeli classification as purely incidental. I hope that friendly relations can continue, but let’s not pretend that the Israeli flag will soon fly in Almutanabi School.

2 Replies to “Who are 45% of the People in Your Neighborhood?”